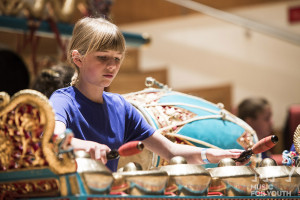 This group for more experienced players aged 11-18 meets once a week in Headington, Oxford.

It was formed in 2008 after St Andrew’s School Gamelan Group had performed in the Schools Prom at the Royal Albert Hall. Members who were by then dispersed in several secondary schools wanted to continue playing together, so Oxford Youth Gamelan was formed.

The group play traditional Javanese pieces and also compose their own music for gamelan.

They have participated in the National Festival of Music for Youth several times, and also performed at the Southbank Centre in London in the Gamelanathon.

In summer 2015 they gave a one hour Family Gamelan Concert in the Holywell Music Room. In July they performed at the finals of the National Festival of Music for Youth in Birmingham and were given an Innovation Award.